English learners with disabilities have both language- and disability-related needs that vary for each student. Successful instruction and assessment for English learners with disabilities are contingent on recognizing and addressing their unique needs. Data on numbers of students in the categories of disability are collected each year through a child count process. Annual reports of these data may be found on the U.S. Department of Education website.

Figure 1. Percent of ELs Ages 6 through 21 Served Under IDEA, Part B by Disability Category* 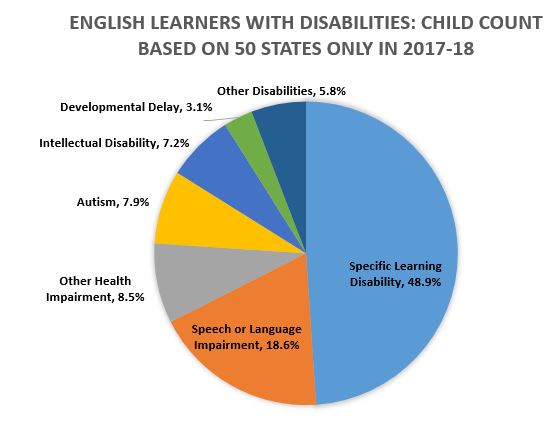 NCEO is supported primarily through a Cooperative Agreement (#H326G160001) with the Research to Practice Division, Office of Special Education Programs, U.S. Department of Education. Additional support for targeted projects, including those on English learners, is provided by other federal and state agencies, and other educational organizations. The Center is affiliated with the Institute on Community Integration at the College of Education and Human Development,University of Minnesota. Opinions expressed on this website do not necessarily reflect those of the U.S. Department of Education or Offices within it.